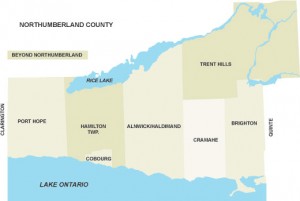 The amalgamation of municipalities done back in the 1990s is beginning to creak under the stress of the current political climate in Northumberland County.

Port Hope council’s efforts to realign the tax rates between the rural and urban areas stirred up a long simmering dissatisfaction between the residents of former Hope Township, now called Ward 2, and the town of Port Hope, Ward 1.

A recent letter to the editor nailed the general mood when one resident complained of a proposed tax increase, which was approved later in the week.

The letter outlined how residents in Port Hope’s Ward 2 have a good reason to be critical when they do not received garbage pick-up, have next to no streetlights and the roads are in poor condition. It went on to talk about poor snow ploughing and a lack of a full-time fire hall. Meanwhile library service in Garden Hill is minimal, it stated. The library was almost closed several years ago.

Meanwhile, Hamilton Township recently finalized a sharing agreement with Cobourg for library services, but it is also facing a reduction in services.

These are only some examples of the long-standing friction between rural and urban municipalities in Northumberland. For those with a long memory, the failure of the Diamond Triangle Economic Commission was another example of local attempts at sharing services that eventually fell apart. The list is long.

After nearly 20 years of experimenting with amalgamation, the vision of the Mike Harris Conservatives is straining under the pressure of municipal efforts to control taxes. When it took place, the Conservatives restructured 160 municipalities, reducing the number from 815 to 445.

West Northumberland saw the joining of Hope Township and Port Hope with Cobourg and Hamilton Township remaining independent. Colborne and Cramahe were combined, along with Brighton and Murray Township, Haldimand and Alnwick, Seymour and Campbellford.

But rather than finding economic efficiencies and cost effectiveness, the Tories and Liberals have continuously downloaded services, leaving municipalities struggling to control costs. Originally, welfare, roads and other infrastructure costs were among the many costs forced on the new restructured municipalities. The Liberals have promised to upload some welfare costs over five years, but overall this has done little to alleviate the burden of the wide-range of expenses municipalities now face.

While the Harris government was able to bring provincial costs back into line, the impact was not sustainable. Now, the Liberals battle with to control a $15-billion deficit, while municipalities grapple with maintaining local services.

The legacy leaves municipal taxpayers seething. For some municipalities, Cobourg being one, the dependency on constant construction and development ease the pain, but this may be shortsighted as the demographic shifts and population trends fade in the future, there may be far more empty buildings and a dramatic drop in tax revenues.

Ward 2 residents are correct to go after Port Hope council to ensure value for money. The same holds true for Hamilton Township and other municipalities across the county.

But no one should be surprised if the term “de-amalgamation” suddenly starts popping up more and more. And, Port Hope council is the most vulnerable.

With its active citizenry and vocal opponents, council is under immense pressure, despite all attempts to ignore criticism and, at times, common sense. These dissenters will stoke Ward 2’s aspiration and within no time, it could be facing a revolt.

Also, Northumberland County council could easily become a target, too. It has enjoyed a long respite from the usual criticism aimed at it for many years. Like lightening in a forest, a fire of discontent could easily spread around Northumberland.