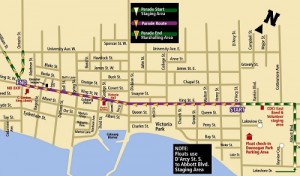 The rescheduling of Cobourg Santa Claus Parade drew some unfortunate attention to the event, leaving organizers a bit red-faced. While it does not need to be blown out of proportion, it is still significant all the same.

It appears there was an oversight when the annual parade was scheduled on Nov. 10, one day before Remembrance Day. Event chair Ron Wiebe said the Lion’s Club of Cobourg, Cobourg Downtown Business Improvement Area (DBIA) and local cable station COGECO put on the parade.

There is an incredible amount of work goes into the parade, which costs about $14,000. Sponsors, floats, bands and other details need to be co-ordinated. It is not hard to imagine the logistics, considering some bands and other groups may be booked for multiple appearances during this time of year.

It is usually planned for the second Sunday in November. Last year, it was on Nov. 18 because Remembrance Day was also in conflict.

It seems the community reacted through social media and other channels, forcing organizers to reconsider. Then, the date was changed to Nov. 17.

It appears some people felt it was disrespectful to hold it so close to the day when veterans are honoured.

“We feel bad that we created the issue we did and we meant no disrespect,” Wiebe told Northumberland Today.

This only makes sense. The Legion and local servicemen and women should be the focus on that weekend. Both groups should not be competing for the community’s notice. And, from a public relations point of view, by holding the events separately, each can garners maximum media.

So, this makes a lot of sense.

But, there is another issue underlying this one. This one may not be as easily resolved, but cannot be ignored.

Christmas, along with other holidays, is being promoted far too early. If the parade remained as scheduled, it would be seven weeks before Christmas Day. Seven weeks!

People are already bombarded by businesses promoting holidays way in advance. Summer is not officially over and stores are already displaying Thanksgiving items and some have Halloween merchandise.

No doubt, someone in the marketing department must believe promoting holiday merchandise months in advance must mean more sales. Yet, from a people’s perspective, it feels wrong.

Rather than getting excited or looking forward, seeing these promotions are numbing. It should be possible to enjoy the last days of summer or the energy of watching kids return to school before someone shoves skeletons or turkeys in our face.

When it comes to Christmas, it seems magnified. The Sears Wish Book arrived on the doorstep the other day. Really! It is only September. Sure, there are those who are super organized who are already purchasing gifts. Good for them. But, do we really need the marketing?

Still, no amount of ranting will cause any giant retail conglomerate to rethink its marketing strategy. But, the Santa Claus Parade organizers may not realize they were given a gift this year.

Maybe they should permanently change the parade date to the third or fourth Sunday in November. It would reduce any possible controversy with Remembrance Day in the future. And, it would give them a chance to hold the media spotlight and community’s attention as a sole event.