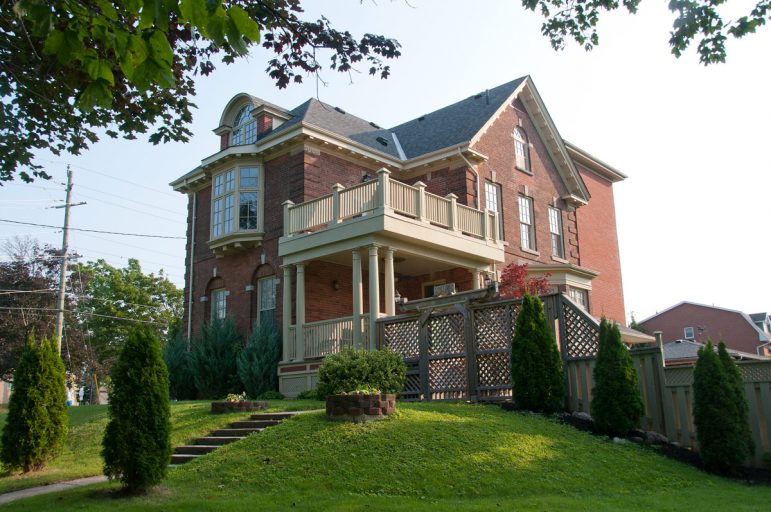 394 College Street in Cobourg is being renovated to create five apartments. Photo by Cobourg Internet.

One hour 43 minutes and a few moments:

The first part of the meeting was a joint presentation to a combined hockey team that had succeeded in the season. In the remarks from both presenters – the two Mayors of Port Hope and Cobourg, the dreaded “A” word surfaced. Mayor Brocanier uttered, “Amalgamation (for the hockey teams of both Towns)is a success!”

Ashley Purdey, the Communications Officer, made a presentation explaining the viral video that came from the Marina security cameras. This video, an interaction between a fox and an owl, was put up on social media to generate positive publicity for the Town and has generated inquiries from the world. The video has been licensed to ‘Viral Hog’ to monetize the publicity and push the video. With less than half a million views this has been deemed a social media success. Just wondering how many views has the Tim Hortons videos generated, the BBC even picked up on that one. Who was it that said, “No such thing as bad publicity, just spell the name right!”

A delegation from the opposition to the change in rezoning and development of 394 College appeared to kick the cat for the last time. Ms. Chorley stood to offer recommendations to what she thought was a flawed process. Firstly she deplored the notification process describing it, the Town’s efforts, as “A tiny ad published in a defunct paper. Ninety-two persons were not notified.” Another complaint was that the developer said in the first application “that no exterior changes were proposed”. In fact, there were three exterior changes and Ms. Chorley asked why they were not told. The official answer was that the changes were ‘maintenance’ and so small that they did not need to come to Council. But serious enough that the Heritage Committee was discussing them?

As Ms. Chorley asked, “Was this development misrepresented to Council?” Only one Councillor – Cllr. Seguin picked up on this point but failed to follow through and let the matter drop. Ms. Chorley’s final comment was a perennial – did Council listen to the public? “Despite all of the public participation, not one concession has been made.

Ms. Chorley’s presentation was given the brush-off indicated by the usual insult of not being asked any questions. But then the pushback started. The developer’s legal person declared, “Ms. Chorley’s remarks were speculative, unsubstantiated and untrue!”

The Mayor then started to backfill and gave the floor to the Town’s Director of Planning who proceeded to give a mini-lecture about the differences between the Planning Act and the Municipal Act, and also defended the notification process, admitting that the ninety-two people who didn’t get notifications were not legally entitled, under the Act, usually people do get notice as demonstrated in previous applications. But there was a ‘glitch’ in the GIS system that the addresses were pulled from, so notices were not sent. This additional layer of notification is a ‘frill’ that Cobourg usually employs, but failed in this instance, but because the ad in the paper was used the Town had filled its legal obligation.

However much discussion the one observation from here was missed. The suggestion to post a proactive sign announcing that a ‘rezoning’ was applied for, was not even picked up by anybody.

The Deputy Mayor introduced his motion to establish a “Council remuneration review committee” passed without comment or questions. Stay tuned for that one.

A letter from a Cobourg resident – Mr. Greg Hancock – asking for help in getting changes made to a private building’s wheelchair ramps was punted back to him telling him to take it up with the province.

The last item of business – Councillors’ Reports revealed a couple of nuggets. The Budget Review meeting was taking place this week and was being televised – a gripping view for sure! The new town bus is in Toronto being covered with a decal wrapping and will be introduced in three weeks time.