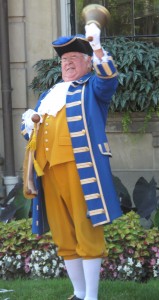 There are some people in a community who are so important, yet they never hold an elected office or head some big company or become the executive director of an organization. These people rise to prominence because of their character – because of who they are and what they contribute. Tom MacMillan was one of those people.

MacMillan died last night. He was 78.

A retired OPP officer, MacMillan was a fixture in Cobourg. He proudly supported the community at every turn. Whether it was as the town crier or as the man out in front of the Cobourg Concert Band during the Santa Claus parade each year, MacMillan was iconic.

He became the town crier in 1990, wearing a blue and gold jacket, trousers and tiny gold-rimmed glasses. He never needed a microphone. His booming voice would herald the opening of a grand town project or a tiny shop on main street. He was in demand – high school formals, community dinners, award ceremonies, Christmas Magic and the list goes on.

No matter what the event, the price was a draught of beer. He drank it with almost as much enthusiasm as he did when he called out as town crier.

Next, people will remember him most in his role with the Cobourg Concert Band. For the past 30 years, he was a drum major. He walked in front of the band with a huge mace, guiding the rest of the band as they marched. With his pith helmet and red uniform, he looked like a character out of a 19th century novel returning from the Crimean War. The band would play and he would call out, then as he walked, he would hurl the mace high into the air, catch it, then put it over his head, swinging it around, much to the delight of the crowd. It was impossible not to be caught up in the spectacle.

Both as a reporter and citizen, I met him on many occasions. He was always affable, kind and generous. He had a wonderful sense of humour. And, he knew so much about so many.

In a world where it means less and less to live in a rural community, people like Tom MacMillan represent a spirit that is unique. He was a proud supporter of the town. People respected him. They listened to him. And, he had influence without seeking power or money.

He will be deeply missed. While some may step up, nobody will replace him.