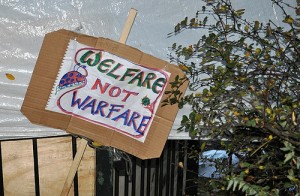 When 40-some years of Conservative rule in Ontario ended in 1985 with the Liberal-New Democrat accord, the creaky and inadequate welfare system was just one of the areas needing reform, and it was achieved quickly after the groundbreaking Transitions Report was released in 1987. Although many of the recommendations made then are still awaiting implementation now, the most important one, to significantly increase the rates, was in place by 1988.

Fast-forwarding to the defeat of the Conservatives’ next tenure in 2003 by the Liberals, the welfare system again needed reform and the Liberals had promised it in their election campaign. Now, nine long years later, the promises continue, but the goal itself remains undone. Since then, the economic tides have turned and Premier Dalton McGuinty is facing a most un-Liberal like prospect, budget cutting to the bone. He even hired economist Don Drummond to advise him how to do it, and now Ontario residents are holding their collective breath waiting to see our new, lean-and-mean budget, typically released in spring.

Meanwhile the Commission for the Review of Social Assistance trundles along, collecting the last snippets of advice before their final report comes out this summer. Since Dr. Drummond has released his report already, they may as well put their pens down and go home: the game is over. The official guru of the Ontario economy has already told the Premier to hold welfare program spending to .5 per cent when the caseload growth is 5 per cent annually just for the disabled.

Sadly, for all those sincere and hopeful people and organizations that dutifully wrote submissions, attended consultations and sent emails to the Premier, the realization that it truly was just a game will be painful. There will be no happy ending like there was in 1988 when cheque amounts and earnings exemptions jumped skyward just in time for Christmas.

Examining the Commission’s own options, we see they’ve already jumped on the Drummond bandwagon without being told, focusing more on cost containment than any notion of progressive reform of the system to reduce poverty. The Commission zeroed in on the disabled, noting there are more people currently enrolled in the Ontario Disability Support Program than on the job seekers’ side called Ontario Works.

It is proposing ideas to people with disabilities working and cut the caseload. The option described in their paper is to perform detailed functional assessments on all of them, then divide them into categories of disability. Those deemed severely disabled will be sidelined, perhaps with a few more dollars monthly. If there appears to be some capacity for work, people would be offered better employment supports to overcome their barriers, and quite possibly required to actively seek work, just like their non-disabled counterparts in Ontario Works. They could be paid less than currently, too.

There are multiple problems with that approach, and all of them will bring a heap of trouble. For starters, 60 per cent of all disability applications granted in 2009/10 were for mental health reasons. Many, if not most, would be physically capable of working and easy targets for a lower paid, job-focused program. But what about their mental impairments? It’s well known that stress can cause these conditions to deteriorate quickly and dramatically, and the Ontario treatment system for mental health conditions is far from adequate to deal with the fall-out.

If that is not a problem, then chuck in another bad idea. The Commission wants to turn over responsibility for the disability program over to the municipalities to operate like they do with Ontario Works. And, that’s a blueprint for anguish.

Municipal welfare workers are not trained to work with disabled persons, especially those suffering from mental health conditions, and advocates know from experience they are focused on getting their “clients” off the system as quickly as possible. Compassion and patience are not their stock in trade, yet those are the qualities required to serve that clientele effectively.

While the Commission cautions that they are only suggesting options, and not making recommendations, the direction they are taking is becoming clear, and the release of the Drummond report underscores the fact that reducing program costs is the real goal of reform. That leaves us where we’ve always been, wondering how those with the fewest resources are forced to pay the highest, most painful price when it comes to belt-tightening. Compared with a possible wage freeze for well paid public service professionals, the continued utter destitution of our welfare poor is morally incomprehensible. Yet, those in the former category will squawk more loudly, and likely more successfully, to keep their paycheques increasing in the upcoming battle to save Ontario. It is to our shame that they’ll most likely score more points with the public too, but while Mike Harris left the building a long time ago, the stink of the stigma he created against the poor lingers on, and progress is elusive.