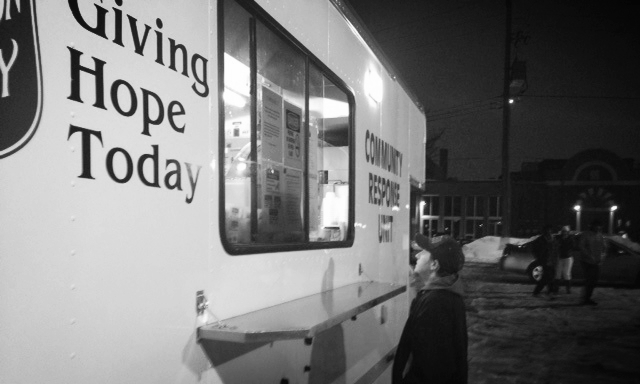 Starting in 2019, the Salvation Army will operate a mobile service in Cobourg and Port Hope to serve those in need as part of a pilot program requested by Northumberland poverty groups, police, fire and emergency services.

Captain Michael Simpson said beginning in the new year a retrofitted recreational vehicle will start touring through the two towns to bring emergency services and other programs directly to people in need.

“If folks can’t make it into an office, maybe they do not feel comfortable going into an office, we will go out to them – to where the people are,” he said during an interview on Consider This Northumberland on Dec. 14.

The mobile program is meant to be an extension of many of the things the Salvation Army already does through its offices on Swayne Street in Cobourg and Peter Street in Port Hope.

Staffed by volunteers, it will go looking for individuals or families in need of a meal, to get warm during the cold, clothing, medical care or just someone to talk to or make connections, he said.

“We want to start to build relationships with people,” he said.

While similar services operate in larger urban centres, it was through partners like the Green Wood Coalition, Cobourg and Port Hope police, fire departments, and others involved in emergency services, who said this was something that was needed in the community.

Even though it will start in Port Hope and Cobourg, if the program is successful and resources exist, it will expand into the rest of the county, Simpson said. It will be up to those communities to identify the need and level of services before the Salvation Army will come in, he added.

“We will build it as needed,” he said.

The Salvation Army will no longer provide the Good Food Box Program, which gave people a bag or box full of fresh vegetables for a flat rate of $10 per bag or $15 per box. It existed for 20 years, but it was becoming labour intensive and it was easier to have Northumberland County, through its Food 4 All program, to take it over. The money saved is helping fund the mobile outreach program.

The Salvation Army is currently holding its major annual fundraising drive just before Christmas called the Kettle Campaign. It hopes to raise at least $110,000 through its donation bubbles located throughout Port Hope and Cobourg, as well as money through its mail-out campaign, which was delivered to all homes in the area, Simpson said.

The Salvation Army is a major provider of a wide range of social services within the area, including meals, shelter assistance, emergency help, clothing, furniture and appliances for people in need, along with addiction counselling and outreach. Its total budget is approximately $375,000 annually, which comes from the fundraising and Northumberland County social services grants make up the balance, Simpson said. It provided $120,000 just on homelessness in partnership with the Salvation Army, he said in the interview.

Besides talking about the new mobile outreach program, Simpson discusses the Kettle Campaign in detail, along with the various programs and plans in the Consider This Northumberland Podcast above. Please listen for the full interview above.