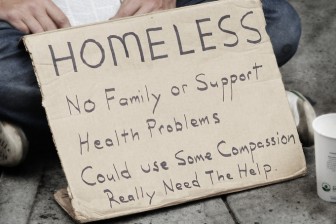 Homelessness was given a face in the local media last week as residents were reminded about the people who don’t have a place to live in Northumberland County.

Green Wood Coalition director David Sheffield, an outreach worker in Port Hope, has said many times, there is no way to understand fully the scope of the problem in the county because there are not even the statistics to paint a realistic picture.

A huge part of the problem is there is insufficient data; but, there are efforts underway to begin to gather those figures, he said in an interview done in July.

Sheffield addressed the issue when the study titled Housing First in Rural Canada: rural homelessness and Housing First Feasibility across 22 Canadian communities was released on July 9. The report delivers a stark picture of homelessness outside the country’s largest cities.

Written by Dr. Jeannette Waegemakers Schiff and Alina Turner, in co-operation with the University of Calgary School of Social Work, it is based on 22 interviews with communities under 25,000 from across rural Canada to characterize the state of homelessness. It found rural areas are distinct compared to the types of homelessness found in urban centres.

The Ontario government required the county to have a plan. But Sheffield is critical of the county strategy when it comes to dealing with homelessness. Until there are hard, accurate numbers, residents, bureaucrats and politicians will not realize the seriousness of the issue.

The Calgary study identifies a number of common themes beyond the distinct nature of rural homelessness. It said many communities face issues related to a lack of social program, poor local economies and a lack of affordable housing. All this demonstrates the complexity of the problem when attempting to create solutions.

One of the challenges facing Northumberland is the lack of local services. While there may be transitional housing or shelter available in Cobourg or Port Hope, it means someone in Campbellford must leave family, friends and other resources or networks. To leave and go somewhere else makes it very difficult.

Co-operative efforts between the Haliburton, Kawartha, Pine Ridge District Health Unit and housing advocates, like Sheffield, represent positive first steps. Hopefully a full and detailed survey of homeless people can be done. It is a daunting and complex task, explaining why the county has not done this recently.

And, the federal government’s Housing First strategy has provided money to homeless foundations to do good work.

Still, local efforts to address these needs miss the mark. Certainly, there steps are being taken by bureaucrats and some policies are in place. And, there are good grassroots programs like Green Woods and the Salvation Army going on.

Far too often, homelessness is a hidden issue in communities so the public is not aware and politicians are not held to account. As candidates arrive on doorsteps, it would be a good opportunity to ask those running for mayor about what they plan to do and then make sure they follow through.