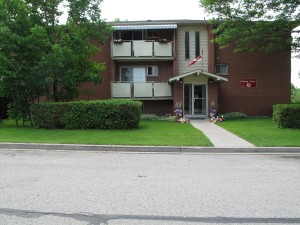 The two-storey, nine-unit apartment at 45 Spencer Street is being considered by council for a conversion to condominiums. Photo by Robert Washburn

The conversion of a nine-unit apartment building on Spencer Street East will not reduce the amount of affordable housing in Cobourg, the town planner said Thursday.
An application from Rodger Cooper to convert the existing rental apartment at 45 Spencer Street East, on the southeast corner of John and Spencer streets, came before the planning advisory committee Wednesday. It recommends council should approve the conversion.
The units will sell for approximately $115,000 to $127,000. Current tenants will not be affected by the conversion. Under the provincial legislation, current tenants can continue to live in the apartments. They cannot be evicted based solely on the conversion. And, they can continue to live and pay rent.
“We do look at the issue of affordability in order to make sure it is the right thing to do,” Town Planner Glenn McGlashon said.

The town meets the Canadian Mortgage and Housing Corporation vacancy rate, which would indicate if there was a shortage of affordable housing, he said.

In 10 years, two other apartments have made similar application and both were approved, he added.

The corporation and the Ministry of Municipal Affairs and Housing state that a vacancy rate of 3 per cent is acceptable. Any lower and it means there are not enough affordable places to live. Higher means there are too many.

Cobourg has an overall score of 3.1 per cent. Recent statistics from the housing corporation show the number of one-bedroom apartments is slightly tight at 2.2 per cent.

The town included an affordable housing policy in its new official plan, currently before the ministry awaiting final approval. In the new policy the town is studying a number of options to encourage affordable housing.

One option is to reduce development charges, McGlashon said. These are fees paid by developers to defray costs of bringing services to a site and prevent local taxpayers from bearing the financial burden of development.

Another option is demanding a percentage of units in a development must be affordable. If not, the developer would pay into a housing reserve fund to be used to fund affordable units.

Still another option is allow people to create apartments in existing homes. By allowing someone to create a basement apartment, for example, increases the number of affordable units with little impact, McGlashon added.

The town can also work more closely with the Northumberland County Housing Authority, which is responsible for finding housing for people in need.

“Everyone has the right in our society to have access to good affordable housing,” he said.

Once approved, affordable housing may not be at the top of the list of planning priorities. With a good vacancy rate, there may be other items that will get dealt with more quickly, McGlashon said. If the vacancy rate was lower, obviously it would become more urgent, he added.

The recommendation from the committee will go before council Monday night.