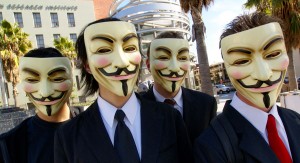 Since unrest in Europe started bringing thousands into the streets, then spread to the Middle East, many of us here in North America have been watching, waiting for a similar uprising to start on our side of the world. While the Tea Party in the USA has grown and been quickly nurtured and co-opted by the rabid Right, it hasn’t exactly been the expression of discontent progressives are waiting for and remains well outside any movement towards addressing what ails us.

Certainly the Occupy Toronto bunch, as well as those in cities all across Canada, have been inspired by the Occupy Wall Street activities, but we have our own gripes that aren’t related to our disappointment at American President Barack Obama’s failure to punish the perpetrators of the financial collapse there. Starting with the election of Prime Minister Stephen Harper with his full-on majority, the anxieties of many Canadians have grown into something more palpable, more directly threatening as the Conservatives’ ability to force their regressive policies onto the country become that much more achievable. Not only is the economy at risk but also so is our precious environment, and activists have finally understood the same corporate interests are threatening both with their selfish, short-term thinking.

But it’s more than that, much more. Over the last 20 years or so, the nature of protest has changed, as we’ve moved from simple, one-off events protesting single decisions or issues to this, an ongoing movement ready to challenge the very nature of Western society. The Occupy Toronto website ambitiously states their goal is to work towards drastic changes to economic systems that are destroying our economy, social liberties and the environment. Direct targets for now include corporate greed, taxation and the cancerous growth in inequality of wealth in this country that has been allowed to happen under both Liberal and Conservative governments. David Suzuki, a champion of the Occupy Movement, notes that an economy is no good when it’s based on constant growth and the endless increase in exploitation of our finite resources. He asks why do we allow bail-outs and ask for nothing in return, why do we set tax rates that increase wealth disparity, and why do we encourage a consumer culture when we need to conserve.

Why indeed. For those of us working for social justice, it`s been a very discouraging 20 years that has seen conditions worsen, not improve, despite all our efforts to raise awareness and inspire demand for change. We`ve been dismissed, discredited and finally demonized, relegated to fringe status as special interest groups, as if caring about issues is somehow an underhanded and untrustworthy activity. We`ve been intimidated into being afraid to protest, afraid that by drawing attention to an issue we will only discredit it. We have been rendered powerless by the vast influence of corporate business groups, their tight control of both mainstream media and the politicians, whose grip on power depends on corporate contributions, financial and otherwise. It`s no wonder we`re pissed off at the whole corrupt culture.

Aside from that smoldering anger, the growth of social media has had an unexpected consequence, that of educating the masses. People whose only interest has been in watching reality shows on TV have been awakened, slowly but surely. As their paycheques get smaller and their debt soars, they`re starting to think something is wrong here, and maybe it`s something that requires their attention and even action. We can see that awakening when we examine the faces at the rallies and in St. James Park. The usual suspects are there, those citified radical progressives we`re used to, but so are the solid middle class working types, the seniors, the young and the poor. It`s different this time, there is hope as well as anger; there is understanding, as well as fear.

One of the hardest realities to grasp, as an agent for change, is that nothing happens overnight. No protest, no matter how large or how compelling, will cause our leaders to announce the next day they`ve been wrong, they`ve seen the light and have decided to meet our demands. When it comes to demands like those of the Occupy Movement, demands to change the very nature of the society we live in, all bets are off. The biggest contribution of the protesters may well be their role in waking up the sleeping masses and causing them to re-think, or think at all, about how the world works, and how it should work if we want this planet and the people on it to continue into the next millennium. The crisis is that real, and that urgent. Finally, enough of us see that and maybe we can really make a difference. Let`s hope so; time is running out.