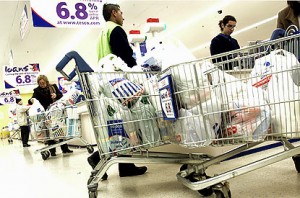 When it comes to the use of recyclable bags over plastic in grocery stores and other retail outlets, the answer should be simple: Yes.  But that would be too easy.
A full-blown debate over retailers charging five cents to customers for a plastic bag was ignited by Toronto Mayor Rob Ford last month when he announced shoppers “can’t stand” the levy. He claimed it was a burden to businesses. There was no specific plan when he first made his claims. But his comments have launched passionate pleas from both sides.

Environmentalists herald the fee, which was introduced two years ago, as an effective deterrent in stopping huge amounts of non-degradable plastic from ending up in landfills.

It was extremely effective. The Canadian Council of Grocery Distributors claims a 71 per cent drop in the number of plastic bags distributed since the charge came into effect.

As supporters rallied against Ford’s idea, the other side was launching countermeasures. Small business associations wanted the fee killed because it was a hassle. Then, in recent weeks, a series of stories were in the media about certain bags having lead in the print and lettering. Major retailers like Lululemon, Sears and grocers, like Winn-Dixie and Wegmans in the United States, are recalling their reusable bags.

Lead is usually considered lethal only if ingested. But the fear is the lead could contaminate soil and water in landfills, affecting the environment.

This news comes after chains like Loblaw reports selling 35 million reusable bags. Sobey’s says it has sold eight million. This does not count all the retailers and other outlets that offer the bags.

Finally, on top of all of this, consumers discover the five cents being paid to the retailers is not being collected by the government for environmental program, but it left to businesses to donate or keep as part of its profits.

This is all very counterproductive and unnecessary, but demonstrates the kind of negative agenda that creates a mountain out of a molehill. It appeals to a minority of anti-environmentalists who are lazy and like hurling insults at those who make an effort to care. And before this issue suddenly becomes a destructive debate in Northumberland County, retailers and local government should move quickly and decisively.

While the notion of preventing plastic bags from going into landfills may seem like small potatoes in the face of all the environmental woes, it remains a good thing. As one environmental group stated, it is a way people can do something simple and makes them feels like they are participating.

Next, it is effective. The facts and figures from industry show a dramatic decline. It would seem silly to go back now. The idea consumers are being nickel and dimed to death is a mute one. It is a pain to find a nickel when forgetting the recyclable bags in the car, but it acts as a good reminder for the next time.

It is profitable for retailers, who sell the bags, as the figures show the huge number of reusable bags that are sold. Keeping the five cents is not good.

The toxic bag scare is a blip. Those bags can be recalled or properly disposed. And truly, unless people are licking the outsides, there is no immediate human health risk. These just need to be handled properly, just like getting rid of old paint cans.

So, a great opportunity exists for local politicians and the environment committees. It is time to reach out and tweak this great idea so it becomes even more effective and beneficial to our community.

First, steps should be taken to ensure the fee stays in place locally and all businesses should be encouraged to participate. Then, solicit retailers to commit the five cents to a local environmental project, like the Ganaraska Forest Centre or other education programs at the conservation authority.  Maybe, the Northumberland County Land Trust could be the beneficiary, since it protect important green space.

Using the money to support environmental educational programs or protecting the environment on a local level will mean greater awareness and help in a targeted way. The most vital aspect is to take action on our own and not let the big city agenda dictate our path.